It’s February, already folks! Welcome to the month of Canned Food, Snack Food, and Return Shopping Carts to the Supermarket (I’m not kidding about that last one, either).

But I feel that one of the more important observances this month is National Hot Breakfast Month. 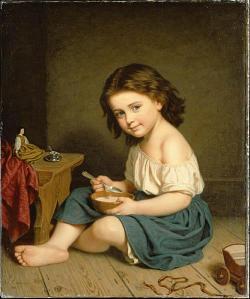 Skipping breakfast: Don’t deny it, you’ve probably done it on more than one occasion. Maybe you never eat breakfast. According to an article in the Huffington Post, 31 million Americans skip breakfast each day.

I know I was once a member of that club (thinking that two meals a day meant fewer calories to worry about). Through most of high school, college, and a majority of my 20s, I rarely ate breakfast. I’d roll out of bed, down a quick, but potent coffee, and run out of the door to start my day.

But once I got on the breakfast wagon, I realized how wretched I had been all those years. I was always ravenous and rather desperate not even halfway to lunchtime (often breaking down and eating lunch at work just shy of 11 a.m.). So I would eat MORE than usual, because I was in feast vs. famine mode. I would be fairly useless through the morning in class or at work, until I got food into me. My answer? More coffee, please! And having a coffee on an empty stomach – that never led anywhere good. Between a rebellious stomach and coffee shakes that would show up on the Richter Scale, skipping breakfast made me pretty miserable.

When you “starve” your body like this, as many dieters know, your next meal becomes a make-up session. Like we are biologically programmed to do, when food is present and it thinks it’s in a famine, it craves and tells you to stock up: It feels like it may not see another full stomach for days! So while in famine mode, your body begins to tighten its belt, so to speak, on its calorie spending. Just like someone who has had their hours cut at work, budgeting commences. You begin to count your pennies and spend less. Your body is no different.

So, when depriving your body of a satisfied, full stomach regularly through skipping meals (especially breakfast after a LONG night of no food!) or dieting, your body holds on to every precious calorie it can. Your body produces more insulin, so that whatever precious glucose is in your blood for energy use, is scooped up by your body’s cells.

Bottom line? You’re putting yourself more at risk for weight gain. That’s because your body is trying to “store up for the winter,” and it slows down your metabolism to retain any fat or weight for use in lean times. And then when you DO have food set in front of you, you’re more apt to gorge or overeat to make up for the meal you didn’t eat that morning.

Breakfast is not a four-letter word. It helps your body to work at full capacity without feeling threatened about food resources, you feel better and won’t overeat at lunch or resort to quick-fix snacks throughout the morning, and you’ll actually be able to function mentally and physically first thing in the morning.

It’s a good thing. Yay February! Let’s start eating the most important meal of the day!

3 thoughts on “February fêtes for foodies!”