It’s been the recommendation ever since I was a young tot: Eight full glasses of water a day – and an apple – keeps the doctor away. I remember as a kid trying to follow that recommendation; I could barely get through a glass before I realized I was just 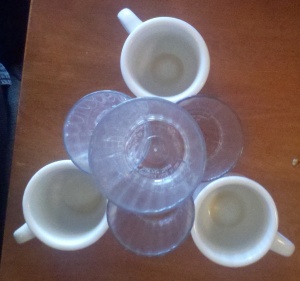 Perhaps I’m just pragmatic, or old-fashioned. But I’ve always been under the impression that our bodies have these mechanisms to tell us when it needs something, for a reason. If we feel hungry, we look for something to eat. If we feel hot, we seek somewhere cool to rest. We feel thirsty, we find something to drink. But eight glasses just to keep our bodies hydrated? I’ve always personally felt that to be overkill.

But in a recent editorial by Spero Tsindos published in this month’s issue of the Australian and New Zealand Journal of Health (Volume 36, Issue 3, pages 205–207,June 2012), the age-old wives tales of eight glasses/2.5 liters a day has been finally called out. I would say ‘debunked,’ but actually the theory of eight glasses a day has never actually been scientifically ratified, according to this editorial.

According to Tsindos, a nutrition expert at La Trobe University in Victoria, drinking your Arrowhead, Desani, or SmartWater (don’t forget about those electrolytes!) is more of a fashion statement these days than beneficial for your health.

“Drinking water is healthy; it can contribute to weight loss, reduce the consumption of sugary beverages3 and − when consumed out of a bottle − can be healthier still, at least according to the water bottle industry,” Tsindos writes.

“Thirty years ago you didn’t see a water bottle anywhere, now they appear as fashion accessories. It supports the emergence of a new status;5 as May called it, ‘the new cultural class’.6 As tokens of instant gratification and symbolism, the very bottle itself is seen as cool and hip.7 Glamour has played a pivotal role. The use of water in weight-loss programs has given added impetus to the notion that drinking large volumes of water a day will help lose weight.

“This is partly true, but it requires a low-calorie diet in the same way as any other weight-loss program. Research revealed that the inclusion of high volumes of water does nothing more than reduce the appetite.3 Further, Dr Victoria Potter noted that consuming water in food eaten had a greater benefit in weight reduction than avoiding foods altogether.”

Tsindos adds that water “shouldn’t be singled out,” and that hydration can be imbibed from teas, coffees, and other juices – as well as unprocessed fruits and veggies. Oh yeah, who would have thought that we get some H2O’s out of our foods, as well? And the long-touted theory that “if you’re thirsty, you’re already dehydrated,” that’s been thrown out, too.
“We should be educating the general public that beverages like tea and coffee, despite their caffeine content, do not lead to dehydration and will contribute to a person’s fluid needs, something worth considering when discussing fluid requirements,” Tsindos concluded.

So if you’re simply looking for hydration, what is his final recommendation? Maintain a “fluid balance” by simply drinking when thirsty. Quite the novel, cutting-edge modern concept.

Sarcasm? I supposed I’d rather drip that, than from over-consumption of water. Boy, that’s a visual.

Don’t get me wrong, I would be the first to jump on the bandwagon to promote water over many other carbonated or sweetened beverages on the market.

But when your goal is cleansing your body rather than just hydrating it, I personally believe that there is no better – and more natural – detox agent than water. Running a little extra water through the body’s canals can help wash out a lot of toxins we pick up in our day-to-day routine. But over-drinking can wash away more than just toxins – essential vitamins.

Our bodies are made up of two types of vitamins: Fat-soluble, and water-soluble. Water soluble vitamins (8 B vitamins and vitamin C), essential for so many functions in our bodies, we do not manufacture ourselves. We get them through the foods we eat, and whatever isn’t used that day, gets flushed out with everything else. So, if we flood our systems with water, well – we’re doing ourselves a big disservice.

But that’s my take on the water issue. Thoughts?