Well, it looks like the offending “pink slime” product has been shelved, permanently, thanks to a great public outcry. So what was all the fuss about? If you weren’t familiar, or would like a little ‘food for thought’ about how beef would get to your plate, read on.

Ammonia: It’s not usually the first thing that comes to mind as a topping for your burger, right there next to the mustard and ketchup. But until this past month, watered down ammonia has been heavily depended on as a cleaning agent for beef that make up McDonald’s burgers, and store-bought ground beef.

Boneless Lean Beef Trimmings (BLBT) are treated with ammonium hydroxide to kill off bacteria like E. Coli. But BLBT is rather known by its pejorative moniker “pink slime.” This use of ammonia as a food-cleaning agent was recently brought to the forefront by British TV food chef Jamie Oliver in an episode of his show Food Revolution back in 2011. He explained the process meatpackers use to transform inedible bits of meat left over from cuts of beef, which is composed of mainly connective tissues instead of muscles, by washing it with ammonium hydroxide. This “meat filler,” he said, was winding up in about 70 percent of America’s ground beef being sold in stores, served in American restaurants, and on the plates of American public school students.

That’s bad enough, but beef companies weren’t even required to list ammonia on any product packaging.

And if you haven’t heard of the Pink Slime issue, it’s about time you come out of that rabbit hole you’ve been in.

On Oliver’s website, he and the “Food Revolution team” further explain that the term “pink slime” was at first coined by a microbiologist, Gerald Zirnsterin, in 2002 after touring a meat plant. His main concern, apart from the processing, was that the filler was not meat (muscle) at all, and did not have anywhere the nutritional value as typical beef cuts. And yet the meat filler is a common component of most beef products.

Oliver’s “pink slime” episode prompted quite the firestorm of unhappy meat-buying customers, as well as naysayers criticizing Oliver for not getting his facts straight. For instance, the ammonia used for beef, one dissenter pointed out, is not common household cleaner like what’s under your sink as Oliver indicated, but ammonia gas.

Whether gas, liquid, or solid, ammonia is still ammonia.

According to the beef industry, though, the reason why ammonium hydroxide gas is not listed in the ingredients of its beef products is because it is used in the processing of the meat, and not as an additive; a process, they say, that is completely safe.

“Ammonium hydroxide is naturally found in beef, other proteins, and virtually all foods,” Beef Products, Inc. (BPI), stated on their website. The use of ammonium hydroxide, the beef industry further explains, is used to add to the amount of ammonia naturally found in the foods and elevate the pH. “The pH enhancement process is an important component of our overall food safety effort,” they said. “By adding a tiny amount of ammonia (gas) to the beef, we raise the pH in the beef to help kill any harmful bacteria that could possibly be present.”

Note the use of “tiny” as a way to downplay its use. How much is “tiny?” They did not expand on that.

And it’s true, ammonia can be found in various foods. Below is a graph of foods and natural ammonia levels Beef Products, Inc. has on its website, referencing a 1973 study printed in The American Journal of Clinical Nutrition (BPI, n.d.). 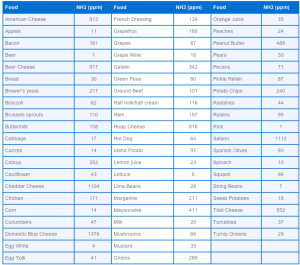 The Agency for Toxic Substances & Disease Registry (ATSDR)’s Regulations and Advisories (2004) for ammonia likewise stated that the FDA did not consider ammonia or ammonium compounds “normally present in food” to be a health risk. “[A]mmonia and ammonium ions are recognized to be integral components of normal metabolic processes,” the ATSDR stated (Regulations and Advisories, 2004). But what about the added ammonia during the meat-cleaning process? It doesn’t mention that.

But on the other hand, ATSDR did mention in that same report that ammonium salts in foods had been put under strict regulation. Maximum allowable levels in processed foods are as follows:

Apart from food industry applications, ammonium hydroxide is also used in toxic products such as household cleaning agents to dynamite, reported on SheKnows.com, as well as pesticides. Over one million pounds of the chemical mixture is used annually in the U.S. in a variety of industries, according to Scorecard.GoodGuide.com, including circuit board manufacturing and metal degreasing. Scorecard is a pollution information website.

Scorecard says that ammonium hydroxide is “less hazardous than most chemicals” (graph below).

Although not proven to be a carcinogen, Scorecard’s other health assessments on the use of the popular product left a little to be desired. For inhalation non-cancer risk value, national ambient air quality standard, ingestion non-cancer risk value (reference dose), and national water quality standard, the study results were either “data gap” or a “gap in regulatory coverage.”

“Exposure to chemical substances can cause adverse effects on the respiratory system, which consists of the nasal passages, pharynx, trachea, bronchi, and lungs. Respiratory toxicity can include a variety of acute and chronic pulmonary conditions, including local irritation, bronchitis, pulmonary edema, emphysema, and cancer. It is well-known that exposure to environmental and industrial chemicals can impair respiratory function … Acute exposure to respiratory toxicants can trigger effects ranging from mild irritation to death by asphyxiation. Prolonged exposure to respiratory toxicants can cause structural damage to the lungs, resulting in chronic diseases such as pulmonary fibrosis, emphysema, and cancer (Health Effects: Respiratory Toxicants, 2011).

So while it has not been proven outright to taint the meat at plants, ammonium hydroxide certainly is a health risk for workers exposed to the ammonia at the plants.

Still, the idea of using these harsh chemicals used primarily as an industrial cleaning agent for metals or leftover cow parts not even considered “food” is indeed troubling. As certified fitness nutrition coach Sylvia Nena noted in her blog, just a glance at the Materials Safety Data Sheet (MSDS) for ammonium hydroxide is certainly off-putting, and therefore understandable why regulations require it to be stored separately away from food in restaurants. Some parts of the MSDS she lists: “DANGER! Causes eye and skin burns.” “Causes digestive and respiratory tract burns.” “Harmful if swallowed.”  She also further explains that both the U.S. Federal Clean Water Act and OSHA consider ammonium hydroxide “a highly hazardous substance.”

“The state of New Jersey has it on a Special Health Hazards Substance List,” Nena wrote, “which warns that Ammonium hydroxide forms dangerous and highly toxic gas under thermal decomposition or combustion.

“That would be heat…as in cooking,” she added.

The ATSDR also backs up Nena’s position, listing in its report several states in the U.S. where ammonium hydroxide is considered a “hazardous” or “toxic substance.” Those states are Massachusetts, Florida, New York, and Pennsylvania.

So, as soon as Oliver’s outing of the process using this potentially harmful substance in food went viral in the media this year, it caused an outrage by consumers. It made Americans much more informed consumers when it comes to the food they buy.

Although many companies still used “pink slime” before the episode aired, it came to light that fast food giant, McDonald’s, had stopped using the process in the August following that episode, “to align our global standards for how we source beef around the world.” They claim it had absolutely nothing to do with Oliver’s exposé on their meat processing.

And so, the declining market for meat that has undergone the potentially unsafe process of being washed with ammonia is only one battle won. The more consumers are informed about where their food comes from, and what is in it, the more customers can effect change.

But, according to The Washington Post, pink slime is only one of many suspect process additives in fast food today. For example:

Propylene glycol: The International Business Times calls this additive the “less toxic” version of ethylene glycol, which is a dangerous anti-freeze.

Ammonium sulfate: The chemical composition of this additive is akin to the wash for meat

Calcium silicate: The white powder is often used to prevent bricks, roof tiles and cement from

Azodicarbonamide: An odorless synthetic chemical mostly used in the production of foamed plastics.

Sodium acid pyrophosphate: A buffering agent, used for both food and industrial purposes.

And just recently, Lacy Boggs Renner for Organic Authority exposed a few more less than savory details about what could be in our meat products without our knowing it. A document released by the United States Dept. of Agriculture Food Safety and Inspection Service details a long list of chemicals the meat and egg industries are allowed to use in the name of cleaning their product…without having to list them on the packaging. Items published on this list for the purpose of cleaning your food, she says, are popular industrial cleaners for swimming pools and hot tubs, as well as for the bleaching of wood pulp.

“But the weirdest part of this is that the USDA requires the meat industry to list certain anti-microbials—like lemon, salt and other spices—on their labels, but not these hard to pronounce chemicals,” Renner said. “The fact that our meat must be chemically disinfected before it’s sold to us has been kept quiet by both the meat industry and the USDA, and is really a symptom of a larger problem with our food production in this country.”

4 thoughts on “Edible ammonia? Pink slime and friends in our food”